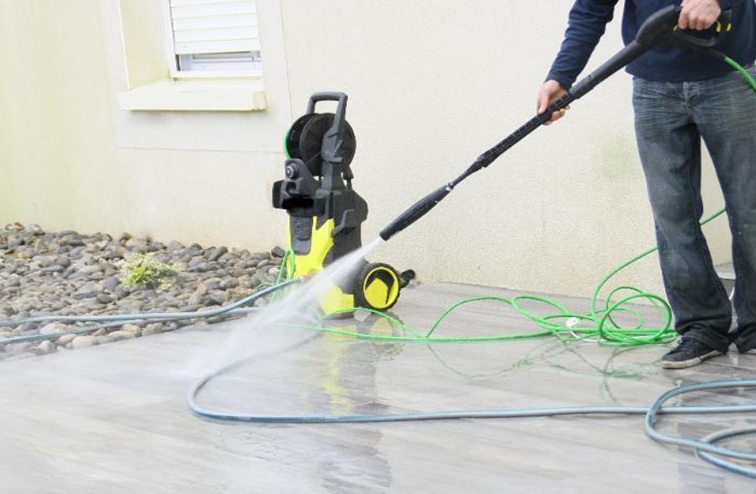 Summer is nearly here, and Rhode Island homeowners are ready to spend time outside again! Of course, some spring cleaning usually needs to be done first. Power washing in Rhode Island is a great way to get rid of dirt and grime that has accumulated over the course of the winter.

Especially when having people over or entertaining, it’s important to feel proud of your home and the way it looks, and using power washing to clean it is a great way to ensure that your home is presentable. Here, we’ll review power washing vs. pressure washing, when your home should be power washed, and whether it’s good for the outside of your house.

Power Washing RI vs. Pressure Washing: Is There a Difference?

Power washing and pressure washing both use a stream of high-pressure water to loosen dirt, grime, and even plants like lichen or algae. Many people use “power washing” and “pressure washing” interchangeably, assuming that they are the same thing, but in reality there is a slight difference.

Both methods use a stream of high-pressure water, but the difference is in the temperature of the water. Power washing in RI uses heated water, while pressure washing does not. The water used in power washing may be as hot as 150 degrees Fahrenheit.

Why Use Heated Water When Power Washing in RI?

The effectiveness of power washing can be attributed in part to the temperature of the water. This isn’t to say that pressure washing with cool water isn’t effective, but if you’re dealing with seriously stubborn grime, the hot water may help loosen it faster. Molecules in hot water move more quickly than the molecules in cool water do, and the motion provides a sort of “scrubbing” action that loosens the dirt particles.

Should I Power Wash My House Myself?

Though it may be tempting to run out and rent a power washer and take care of that pesky dirt yourself, it’s best to hire a local Rhode Island power washing company instead. Due to the force with which a jet of water comes out, pressure washers can cause serious injuries if used improperly. The force can even take a first-time user by surprise and cause them to lose their balance. Overall, power washing and pressure washing should both be left to a qualified power washing company.

Is Power Washing Good for Your House?

Some cleaning methods, despite working well at the moment (or at least appearing to), can ultimately damage your house or lead to other problems. What about power washing for RI homes?

When hiring someone to do power washing in Rhode Island, always make sure that you are hiring a reputable company with the proper amount of experience. Power washing can be beneficial to your home if done correctly. However, damage can occur if it is not done carefully and correctly.

How Can Power Washing Be Bad for My House?

If the wrong pressure or technique is used while power washing, the siding of a house can be damaged or even torn off. Window screens can be broken and paint can peel from a house being power washed too aggressively. Water can also make its way up underneath the siding, which is there to protect your home. If it gets through the siding, then there is the possibility of flooding in your home or water damage on the walls.

In the hands of an experienced power washing company in Rhode Island, a power washer can do a lot of good for your home. The technicians should know how to operate the equipment properly in order to avoid damage, and power washing is by far one of the best ways to remove dirt, grime, bird droppings, and growth from the outside of your home. It removes moss and lichen eating away at your paint, along with mold and mildew that may be growing along with it.

Mold can cause health issues for your family, even on the outside of the house. Semi-regular power washing helps to keep it from growing and spreading.

Best Time of Year to Power Wash Your RI House

Power washing only needs to be done once per year in most cases, but what season should it be done?

Here in Rhode Island, we can face some harsh winters. Power washing is best done in moderate to warm temperatures, so it’s recommended to have it done between March and November.

Some people recommend power washing your house at the end of fall. Fall tends to bring all sorts of things floating through the air, including seed pods and pollen along with the dead leaves that settle in gutters all over Rhode Island. In addition, power washing can be an important part of preparing for winter. Going into the potential for extreme temperatures without anything growing on your house could prevent damage during the winter.

Can Your Concrete Driveway or Patio Be Power Washed?

What Are The Regulations For Loft Conversions?

Some of the Stunning Creations Linked To Joinery